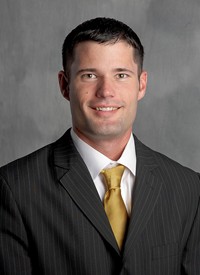 Matt Crane is in his 9th season on the Alabama State baseball staff. Among his responsibilities, Crane is in charge of the Hornets’ pitching staff, scheduling and serves as director of all Alabama State Baseball Camps.

The 2016 season was a standout year for the Hornets pitching staff. Senior Joseph Camacho was named SWAC Pitcher of the Year for the third consecutive season. It also marked the fourth straight year that one of Crane's pitchers took home the honor. Redshirt Junior Tyler Howe would have a breakout campaign in 2016. He would be named a First Team All-SWAC Performer alongside Camacho. The ASU pitching staff would finish at the top of the conference in nearly every pitching category including: ERA, Strikeouts, and Wins. Two pitchers from the 2016 team would sign pro contracts, including Angel Alicea (20th Round, Toronto) and Joseph Camacho (Oakland, FA).

Under Crane, Alabama State has ranked in the top four in the SWAC in earned run average and top three in strikeouts each season. Despite a staff of eight true freshmen and only two upper classmen in 2012, the Hornets ranked fourth in ERA at 5.02 and were third in strikeouts with 350. In 2013, Hornet pitchers were second in ERA at 4.38 and lead the SWAC with 435 strikeouts. In 2014 ASU’s ERA improved to 4.25 (3rd in SWAC) while once again leading the league in strikeouts (373). Senior RHP Dexter Price would go on to sign a professional contract with the Arizona Diamondbacks. In 2015, the Hornets were again third in the league in ERA (4.87), and were first in strikeouts (446) for the third straight year.

Crane had a successful two-year stint as a pitcher in the Wildcats’ program and was a part of two MEAC Championship teams and two NCAA Tournament appearances. Crane transferred to B-CU after playing two seasons at Kellogg Community College in Battle Creek, Michigan. He helped the Bruins to a runner-up finish in the NJCAA Division II World Series in 2007 as a starter and reliever.

Crane a native of Flint, Michigan now resides with his wife Ashley in Pike Road, AL.