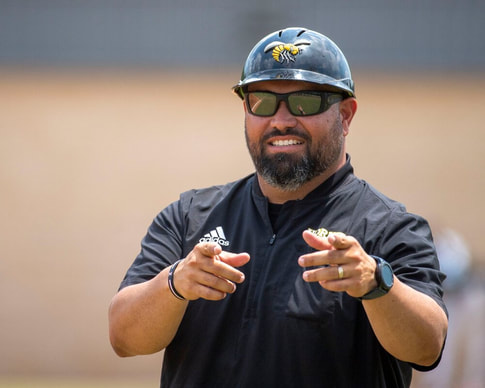 Vazquez has spent 14 seasons as an assistant baseball coach, the last six as Associate Head Coach, including five seasons at Alabama State. In addition to the day-to-day duties of the Alabama State baseball program, Vazquez has coached Hornet hitters and outfielders and is widely regarded as one of the top recruiters in the nation.

Vazquez, named the 2013 Assistant Coach of the Year by the Alabama Baseball Coaches Association, has helped Alabama State post a Top 60 recruiting class each year, as rated by Perfect Game, the largest amateur baseball scouting service in the nation.

He has played in an integral role in the rise of Alabama State baseball into a championship program. Vazquez helped the Hornets land C Richard Gonzalez and OF Richard Amion in the 2011 signing class, both of whom would go on to earn Freshman All-America accolades in 2012. Those two players, along with another 2011 signee in SS Emmanuel Marrero, would prove to be cornerstone pieces of the ASU program, leading the team to 89 wins from 2012-14. All three players were selected in the 2014 Major League Baseball Amateur Draft.

In 2015, two other freshmen from the initial signing class, RHPs Armando Ruiz and Michael Estevez, along with 2012 signing class pitcher Jorge Pantoja, were drafted for signed to pro contracts.

This past season, RHP Angel Alicea was drafted by the Toronto Blue Jays, and three-time SWAC Pitcher of the Year Joseph Camacho signed a free agent contract with the Oakland A’s. Alabama State has had nine players earn a chance to play professional baseball, with six players drafted, all in the last three seasons.

In 2016, the Hornets set a school record with 64 home runs as Alabama State baseball won a school record 38 games, including an unprecedented 24-0 record in Southwestern Athletic Conference play, in winning the first SWAC Championship in program history and earning ASU first berth to the Division I NCAA Baseball Tournament.

Under Vazquez’ guidance, the Hornets have become a more potent offensive team each season. In 2012, with 18 true freshmen on the roster, the Hornets hit .247 (7thSWAC) with no .300 hitters and 14 home runs as the team won 20 games for the first time since 2002. ASU improved in 2013 to hit .282 (second in SWAC) with four .300 hitters and 26 home runs (1st in SWAC), and last season hit .292 with four .300 hitters and 35 home runs. The Hornets led the SWAC in all major batting categories in 2014, including batting average, on-base percentage, slugging percentage, runs scored, hits, RBI, triples and home runs. In 2015 the Hornets were first in on-base percentage and slugging percentage, second in batting average, runs scored, home runs and RBI, and third in hits.

Prior to Alabama State, Vazquez spent the previous nine seasons as assistant coach at Bethune-Cookman, with 2011 his first as Associate Head Coach. Vazquez played a prominent role in the programs’ success, bringing in players that posted a staggering 100-4 MEAC record over the final six seasons, all ending in conference titles and NCAA Tournament appearances.

Playing under former ASU head coach Mervyl Melendez at B-CU, Vazquez earned all-conference honors as a catcher in his only season with the Wildcats, transferring there for his senior season in 2002. As a starter, Vazquez helped post the best record in school history (39-22), including the programs’ only NCAA Regional victory over Florida International. Vazquez then joined the coaching ranks, first as a student in 2003 and, upon graduating, a full-time assistant.

A native of Bayamon, Puerto Rico, Vazquez is married to the former Jana Swanson. The couple has two daughters, Liana and Elaisa.